The German print fabric, referred to as leteisi [or letoitse] in Setswana, is a fabric that has been used in the Tswana society for decades to date. It has now become the traditional fabric for Botswana. Knowbotswana seeks to share the origins and background of the fabric, its use and how it has evolved over time along with its significance, then and now.

The German print, as its name suggests, is a fabric that has its origins rooted in Germany. Even so, it was not adopted for use in Botswana through direct contact with the Germans but it came to Botswana by way of South Africa. Batswana seem to have adopted it as they brought it from South Africans as well as through their continued ties with relations in South Africa. The German print is said to have been introduced to the South Africans by German settlers, who settled in the Eastern Cape and Natal for reasons of trade. The fabric then started being imported from Europe to meet the demands of the German settlers in South Africa.

(Wolff, 1999) adds that by the fall of the 19th century, the Xhosa women gradually replaced their traditional animal skin apparel with this fabric. It was commonly worn by educated Christian women converts at mission stations. When shipped to South Africa from Europe, it was preserved using starch hence its stiffness when it is new. The fabric also has a distinct smell because of this, with the indigo dye used to give it colour. The cloth is still manufactured in that same distinct manner to date; therefore, its quality is not exclusively derived from the manufacturing processes.

The fabric is now manufactured in South Africa by a company called Da Gama Textiles. Initially, the fabric that was produced was blue in color. The South African textile company produced its version first, tested it in places such as the UK, and then produced other two colors; chocolate brown and red which were added to the range. Da Gama still produces the original fabric today with the same texture. The common trademark is the back stamps on the fabric to prove its authenticity. The back stamp is a symbol bearing three cats and the text “three cats” or Da Gama Textiles. The trademark, according to (Visser, 1995) meant for purposes of ensuring consistency in the quality and origins of the product and also to avoid counterfeits by competitors. He adds that they are also made to help buyers distinguish from those of their competitors. 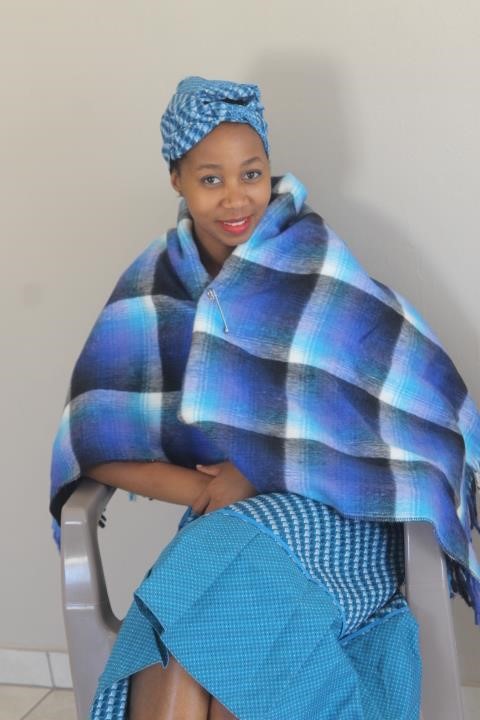 Originally the fabric was blue with small white dots but today it exists in a wide variety of colors and prints. (Rousse, 1989) asserts that Africans do not actually copy designs from one another but motifs of fabrics and designs are assimilated and then used for personal expression as per tribal tradition and culture. This explains how Batswana came to adopt the German print. They adopted it and used it according to the traditions that they see fit which is why the uses have differed from those of the Sotho, South Africans and the Swatis.

In Botswana, the fabric was originally used during traditional functions commonly marriage rituals known as ‘patlo' - a ritual of asking for bride price by the bride’s family from that of the groom. During this ritual, the older and married women would wear skirts and head scarves made from this fabric and put a shawl (mogagolwane or tjale) on their shoulders. During this time, unmarried women were prohibited from wearing this outfit; it was worn only by the bride and married women.

The German print has not only gained fame in Botswana, but it is also present in Lesotho, Swaziland and South Africa, where it is used for the same purposes. The tailors all added that though there is a wide variety imported from South Africa, most actually prefer to travel to the neighboring country to buy even more versatile prints and designs for their clients. The competition is high as each and every client prefers a more unique print and design.

A Sample of Leteisi designs

A random sample of ten highly experienced designers and tailors from both the elderly and youth groups was selected across communities to share samples of the fabric. Their feedback was invaluable as it helped to determine the evolution of the fabric as well as the changes that have noticed over the years.

The designers lamented that in the past the skirts were designed into plain wrap around (khiba) which would be worn with mainly a white top.  People prefer the latest and eye catching designs that suit their body shapes as well. (Fig3, Fig4 and fig7) show a young bride in 2020 during her patlo. Today however, anyone can design their own clothes for whatever purpose they desire to use it for. Furthermore, brides and older women who take part in patlo can design the patterns they wish, with a bit of lace and flowers thrown in to enhance the outfit (fig5 and 2).

Over and above this, the German print is now unisex as males also have attire made from it, usually and likewise for traditional weddings and patlo, and the groom wears a shirt made from the same German print as that of his bride (fig3). This is one spectacular change that the tailors noted that they have seen take place over the years in the fashion industry.

(Fig4) shows a groom wearing a shirt made out of the German print fabric as well. The tailors have also added that the fabric is not only used by the brides, grooms and elders conducting the marriage proceedings alone, but a great deal of their clients come to make outfits to attend wedding ceremonies, whether traditional of modern, designing the fabric into versatile style to turn heads (fig1, fig6 and fig 9).

They mentioned that they have not had any clients who required outfits made from the German print for funerals. Apart from weddings, the designers also added that they have clients that come to design outfits with the fabric for entertainment events. These events are usually meant to embrace and maintain culture of Botswana at the same time entertaining guests. The organizers have shown that most of the revelers for these events are mostly the youth, though they have older people adorn such designs as well. One observation is that the fabric has gained a lot of popularity among the youth over the years.  Ms Gofaone Lephalo, a designer based in Gaborone gladly mentioned that the fabric is one of her favorite to work with especially when designing for the young. There are a lot of versatile ways it can be designed into modern pieces. She laments that most of her clients for this purpose are ladies though the number of males looking to design outfits mostly for wedding events attendance and entertainment events in this fabric has risen. These entertainment events in Botswana include African attire on fleek, son of the soil, domboshaba just to mention a few. Another tailor adds that though her clientele is mostly older women, they usually demand to have designs similar to those preferred by the youth. All the tailors added that in the past, most people preferred   the flare design (fig3) but that has changed to more and more styles such as pencil bottom, fishtail and trousers. (Fig 8) shows a male wearing an outfit made of the fabric to attend an entertainment event. Professionalism is important to these tailors, they therefore provide advice on the print and color that they feel can match the customer’s skin tone, body shape and even personality. 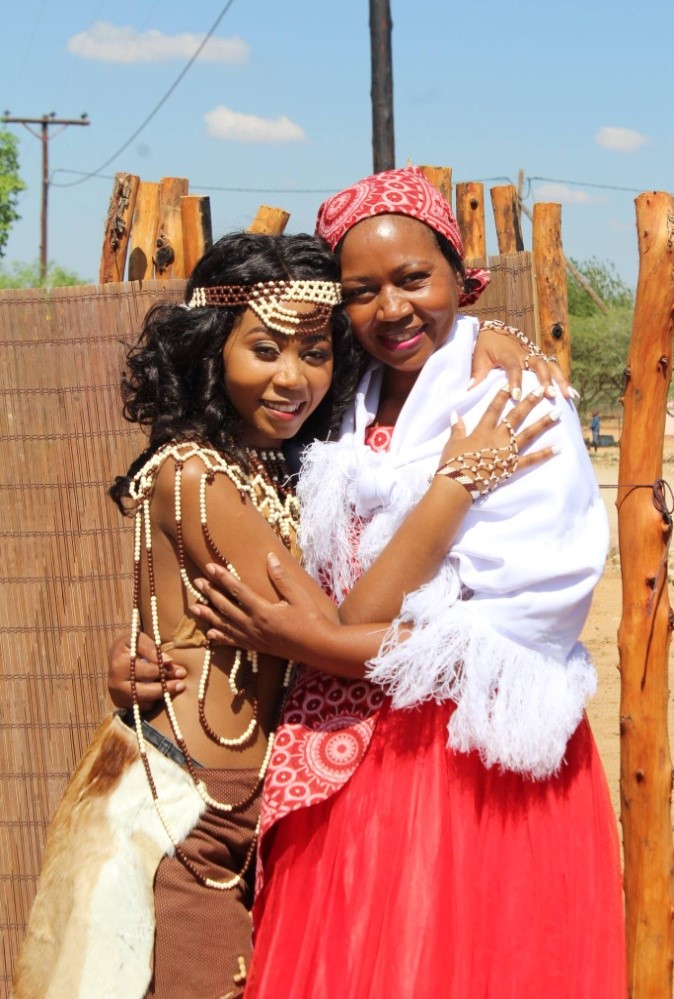 With the widespread adoption of leteisi in Botswana, the German print has become the ultimate fabric for traditional attire among Batswana. Unlike in the past when it was used mainly by the Tswana ethnic groups (especially Bakgatla and Bakwena tribes), it is now worn by all Botswana ethnic groups. Generally, it is commonly worn ceremonies like marriage rituals, such as patlo as well as the wedding celebrations; both traditional and modern.

Whether in the north, east, south or western parts of the country, the febric’s use is relatively similar. For any of the country’s ethnic groups, be it the Kalanga, Subiya, Yei, Birwa, Tswapong, Ngwato or Mbukushu marriage celebration, a large number of attendants will be dressed to kill in outfits made from leteisi.

The change in fashion trends has not hindered Batswana from embracing it. Over and above that, the fabric business has seen a boom over the years and every mall in every major town or village has a shop selling this fabric in a wide variety as well. It is always readily available in the fabric shops, with outfits made from leteisi on display. So this adoption of the cloth has created a huge opportunity for business, either selling the fabric or for fashion designs.

One commendable thing about this fabric is that the Botswana youth have actually embraced it as the country's traditional attire. An outfit made of the leteisi is a must-have for every woman in Botswana. Women wear the outfits not only at marriage events but other entertainment events meant to reflect our culture and its dynamics. Their ability to mix the modern fashion patterns with the old is one interesting aspect of the traditional attire's acceptance and presence. Over and above this, people are also able to wear the outfits casually even away from any special occasion. 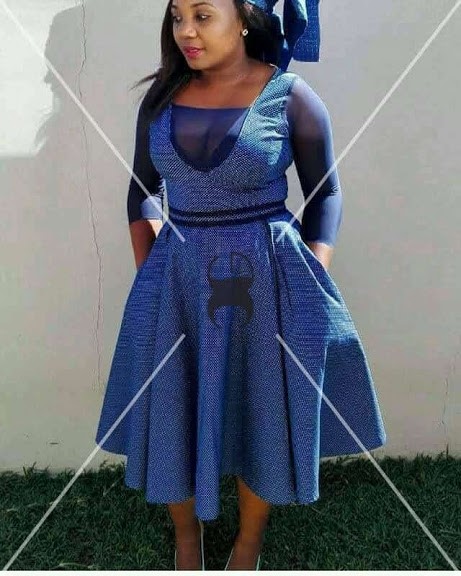