In addition, there are other groups in the minority who include whites and Indians. There also exist settlers from neighbouring countries from Zambia, Zimbabwe, South Africa, Namibia and Angola to add to the cultural mix.

Collectively, all of these ethnic groups are referred to as Batswana; people of Botswana. 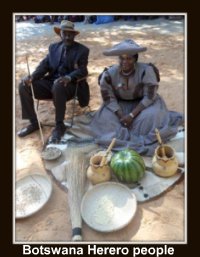 From this ethnic mix-up has turned out a Motswana who is humble, respectful, re-conciliatory and peaceful, courteous, friendly, jovial and above all....hospitable.

About 70% of the country's religious people are Christians with the main denominations being the Roman Catholic, Anglican, Lutheran, Methodist and Zion Christian Church.

The traditional spiritual practices of initiation ceremonies exist, and are being revived. These are called 'bogwera' for men and 'bojale' for women.

During periods of poor rains, there is a spiritual rain-making ceremony called 'go fetlha pula' to invoke rain.

Much of the landscape in Botswana holds the spiritual and mysterious feel that resonates with its people. Places like the Tsodilo Hills, Okavango Delta and Kalahari Desert have a strong spiritual feel about them that has a humbling effect.